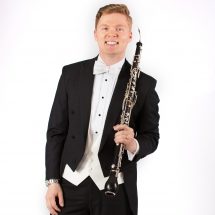 English horn and oboe player Tim Daniels joins the Kansas City Symphony in fall 2018. He has appeared on oboe and English horn with the San Francisco, New World and Memphis symphonies, as well as the Metropolitan Opera and IRIS Orchestra. In the summer of 2018, he toured Japan as a fellow with the Pacific Music Festival led by Valery Gergiev. He has held additional fellowships at the Aspen Music Festival, National Repertory Orchestra, National Orchestral Institute and Spoleto Festival USA. An ardent advocate for new music, he has commissioned and premiered works for oboe and English horn by composers Rob Hutchinson, Teddy Niedermaier and Greg Simon. Deeply committed to education for both young artists and audiences, he has taught a number of private students while pursuing his own studies and is always searching for new ways to connect them to music. His efforts to reach and excite new audiences have led him to perform and instruct in public schools, restaurants and hospitals across the country. Daniels holds a bachelor’s degree from the Oberlin Conservatory of Music, a master’s degree from the Juilliard School and a performance studies diploma from the San Francisco Conservatory of Music. He is also a graduate of Interlochen Arts Academy. His primary teachers include Elaine Douvas, Eugene Izotov, Joey Salvalaggio, Daniel Stolper and Robert Walters. Daniels grew up in the Memphis area and looks forward to seeing how Kansas City’s BBQ stacks up.