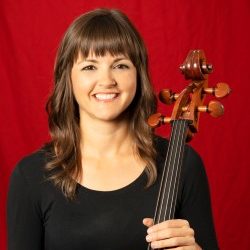 Before coming to St. Louis, she was a member of the Dallas Symphony, Atlanta Symphony and Charlotte Symphony. The oldest of three in a musical family, Humphreys began taking cello lessons at the age of six in Owensboro, Kentucky, after seeing Yo-Yo Ma perform on an episode of Mister Rogers’ Neighborhood. She attended high school at the Interlochen Arts Academy in Michigan and went on to study at Rice University, where she received her Bachelor’s and Master’s degrees as a student of Lynn Harrell and Brinton Smith.

Humphreys served as principal cellist of the National Repertory Orchestra and the National Orchestral Institute, and in 2004 traveled to Graz, Austria, to participate in the American Institute for Musical Studies.

Humphreys spends her summers performing at the Grand Teton Music Festival and the Cabrillo Festival of Contemporary Music. While in Dallas, she served as Adjunct Faculty at Texas Christian University and appeared as a featured artist during the 2018 Aronson Cello Festival. In addition to teaching and performing chamber music, she enjoys cycling, cooking, gardening and yoga.