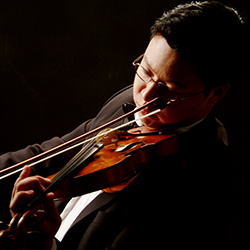 DePaul University School of Music and Music Institute of Chicago

Violinist Addison Teng has given extensive solo and chamber music performances throughout Taiwan, Hong Kong, Italy, France, Philippines, and the United States. He has performed as soloist with the Oberlin College Orchestra, Eastman String Fellowship Orchestra, Sinfonia Academy Orchestra in the Philippines, and the University of Macedonia Symphony Orchestra. Upcoming performances are planned with Symphony Irvine and Music Institute of Chicago Community Orchestra as well as recitals throughout the U.S. and abroad. Teng was chosen by the dean of the Oberlin Conservatory to appear on Italian television to promote Oberlin in Italy. He is the recipient of the 2018 Outstanding Young Alumni Award at Oberlin College and Conservatory, which recognizes young alumni who have distinguished themselves in their professional careers and their service to humanity. He has also been named a Distinguished Alumnus of the Meadowmount School of Music.

A rising pedagogue of his generation, Teng joined the violin and chamber music faculty of the Music Institute of Chicago in 2013, the faculty of the Montecito International Music Festival in 2014, the faculty of DePaul University School of Music in 2018, and the faculty of the Pacific Music Institute in 2020. Previously he served as teaching assistant at the Meadowmount School of Music and Northwestern University Bienen School of Music, assisting Sally Thomas, Amy Barlowe, and Roland and Almita Vamos. He has given masterclasses and coachings at the Taipei American School, Conservatório Villa-Lobos in Rio de Janeiro, Eastman Pre-College, and Lawrence University, as well as classes in Canada, the Philippines, Greece, San Marino, Italy, and China. In the fall of 2016, Teng embarked on a tour to Cebu, Philippines with his students, where he gave masterclasses and concerts. A similar tour in the fall of 2018 took Teng and his students to Thessaloniki, Greece, and in the fall of 2019 they toured San Marino and Italy and were featured on San Marino national television and newspaper.

Teng graduated with a Master of Music in Violin Performance and String Pedagogy from Northwestern University Bienen School of Music and received his Bachelor of Music in Violin Performance from Oberlin Conservatory of Music. His principal teachers and mentors include Sally Thomas, Ann Setzer, Roland and Almita Vamos, Peter Takács, Amy Barlowe, David Bowlin, and Karen Ritscher.

For more information on Teng and his studio, please visit addisonteng.com